Irrigation refers to the artificial application of water to the soil or land. The main purpose for using irrigation is that of assisting with the growing of agricultural crops, the re-vegetation of soils that are disturbed in dry areas or during heavy rainfalls and the proper development of agricultural crops. Other reasons why irrigation is also used is for protecting plants against frost, preventing solid consolidation and supressing the process soft weed growth in grain type of fields. Dust suppression as well as proper disposal of sewage are two more purposes worth mentioning in the case of irrigation.

In the case of surface irrigation systems, the way in which water is used is by moving across the surface of the agricultural lands which need to be irrigated. This way, the water infiltrates into the soils. There are three main types of surface irrigation: furrow, basin and border strip irrigation. It has also become popular under the name of flood irrigation and this is because sometimes irrigation can result in flooding or bear flooding of the land. It has been the most popular and common form of irrigation for agricultural lands for many years in most parts of the world. 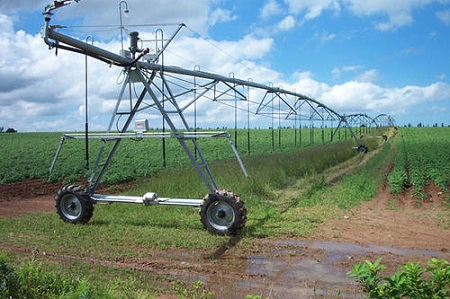 Localized irrigation refers to a system in the case of which water is being applied under low pressure through what is called a piped network. It is distributed following a pre-determined type of pattern and then applied as a small discharge for wag and every plant or its adjacent. There are various types of irrigation methods that follow this system: drip irrigation, bubbler irrigation, micro-sprinkler irrigation, etc.

Drip irrigation has also become popular under the name of trickle irrigation. It functions exactly as its name suggest namely through water falling drop by drop at the roots. The water is thus delivered to the root of the plants drop by drop offering them exactly what they need for proper development. It has already been considered by many specialists as the most efficient method of irrigation when it is properly managed.

The main reason for it is because in its case the water runoff as well as the evaporation processes are minimized. The range of 80 to 90 is what is typically considered the proper range for field water efficiency in the case of drip irrigation. In the modern type of agriculture practiced nowadays, drip irrigation is used in combination with plastic mulch which reduces evaporation even more and which is also the way in which the fertilizer is delivered to the land or soil.

Irrigation is an advantageous system that has been used for many years. Numerous changes have been made to it in time and modern irrigation systems have more advantages than the ones used in the past because new technologies help improve the watering process and minimize the risks.

Tags:
Back to Top